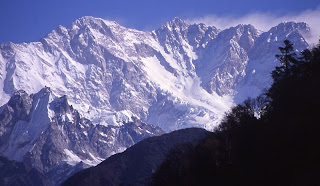 There are two famous national parks in the Koshi river basin: the Sagarmatha National Park, located in eastern Nepal, containing parts of the Himalayas and the southern half of Mount Everest and the Koshi Tappu Wildlife Reserve situated on the flood plains of the Sapta-Koshi River in Eastern Nepal.
Sagarmatha National park
Sagarmatha National park is located in eastern Nepal, including parts of the Himalayas and the southern half of Mount Everest. The park, which is also included as a UNESCO world heritage site, was created on 19 July 1976. Sagarmatha in Sanskrit means "Forhead of Universe" (Sagar: Sky or Heavens; Matha: Forhead) and is the modern Nepali name for Mount Everest. The park covers an area of 1,148 km2 (443 sq mi) and ranges in elevation from its lowest point of 2,845 m (9,330 ft) at Jorsalle to 8,848 m (29,030 ft) at the summit of Mount Everest (highest peak in the world). Other peaks above 6,000 m (20,000 ft) are Lhotse, Cho-Oyu, Thamserku, Nuptse, Amadablam, and Pumori. The upper watershed of the Dudh Koshi river basin system lies in the park. The types of plants and animals that are found in the park depend on the altitude.
The forests provide habitat to at least 118 species of birds, including Danphe, Blood pheasant, Red-billed chough, and yellow-billed chough. Sagarmatha National Park is also home to a number of rare species, including musk deer, wild yak, snow leopard, Himalayan black bear and red panda. Moreover, many other animals such as Himalayan thars, deer, langur monkeys, hares, mountain foxes, martens, and Himalayan wolves are found in the park.
In the lower forested zone, birch, juniper, blue pines, firs, bamboo and rhododendron grow. Above this zone, all vegetation is dwarf plants or shrubs. As the altitude increases, plant life is restricted to lichens and mosses. Plants cease to grow at about 5,750 m (18,900 ft), in the permanent snowline in the Himalayas.
The park's visitor centre is located at the top of a hill in Namche Bazaar, also where a company of the Nepal Royal Army is stationed to protect the park. The park's southern entrance is a few hundred metres north of Mondzo at 2 835 m (9,300 ft), a one-day hike from Lukla.
The presence of the Sherpas, with their unique culture, adds further interest to this park.UNESCO listed the park as a World Heritage Site in 1979 for its unique natural, cultural and landscape characteristics.
Posted by Aama la at 10:25 AM