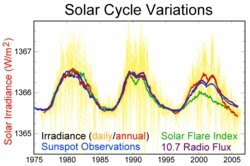 Svensmark and colleagues have proposed another hypothesis related to solar activity, which is that magnetic activity of the sun deflects cosmic rays that may influence the generation of cloud condensation nuclei and thereby affect the climate.Another paper found no relation between global warming and solar radiation since 1985, whether through variations in solar output or variations in cosmic rays.Henrik Svensmark and Eigil Friis-Christensen, the main proponents of cloud seeding by galactic cosmic rays, disputed this criticism of their hypothesis.A 2007 paper found that in the last 20 years there has been no significant link between changes in cosmic rays coming to Earth and cloudiness and temperature.
Posted by Aama la at 2:57 AM No comments: 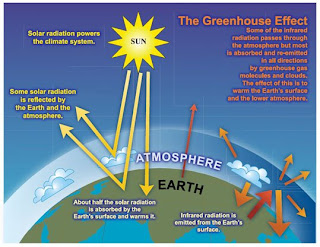 The scientific consensus is that the increase in atmospheric greenhouse gases due to human activity has caused most of the warming observed since the start of the industrial era and that the observed warming cannot be satisfactorily explained by natural causes alone. This attribution is clearest for the most recent 50 years, which is the period when most of the increase in greenhouse gas concentrations took place and for which the most complete measurements exist.
The greenhouse effect was discovered by Joseph Fourier in 1824 and first investigated quantitatively by Svante Arrhenius in 1896.It is the process by which absorption and emission of infrared radiation by atmospheric gases warm a planet's lower atmosphere and surface. Existence of the greenhouse effect as such is not disputed even by those who do not agree that the recent temperature increase is attributable to human activity. The question is instead how the strength of the greenhouse effect changes when human activity increases the atmospheric concentrations of greenhouse gases.

Naturally occurring greenhouse gases have a mean warming effect of about 33 °C (59 °F), without which Earth would be uninhabitable.The major greenhouse gases are water vapor, which causes about 36–70 percent of the greenhouse effect (not including clouds); carbon dioxide (CO2), which causes 9–26 percent; methane (CH4), which causes 4–9 percent; and ozone, which causes 3–7 percent.
Human activity since the industrial revolution has increased the amount of greenhouse gases in the atmosphere, leading to increased radiative forcing from CO2, methane, tropospheric ozone, CFCs and nitrous oxide. The concentrations of CO2 and methane have increased by 36% and 148% respectively since the mid-1700s.These levels are considerably higher than at any time during the last 650,000 years, the period for which reliable data has been extracted from ice cores.Less direct geological evidence indicates that CO2 values this high were last seen approximately 20 million years ago. Fossil fuel burning has produced approximately three-quarters of the increase in CO2 from human activity over the past 20 years. Most of the rest is due to land-use change, in particular deforestation.

CO2 concentrations are continuing to rise due to burning of fossil fuels and land-use change. The future rate of rise will depend on uncertain economic, sociological, technological, and natural developments. The IPCC Special Report on Emissions Scenarios gives a wide range of future CO2 scenarios, ranging from 541 to 970 ppm by the year 2100.Fossil fuel reserves are sufficient to reach this level and continue emissions past 2100 if coal, tar sands or methane clathrates are extensively exploited.
Posted by Aama la at 3:10 AM No comments: 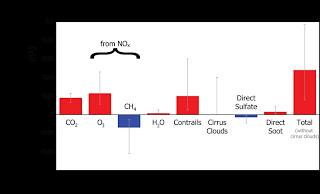 The Earth's climate changes in response to external forcings, including changes in greenhouse gas concentrations, variations in Earth's orbit around the Sun,changes in solar luminosity, and volcanic eruptions. The thermal inertia of the oceans and slow responses of other indirect effects mean that climate can take centuries or longer to adjust to changes in forcing. Climate commitment studies indicate that even if greenhouse gases were stabilized at 2000 levels a further warming of about 0.5 °C (0.9 °F) would still occur.

Global dimming, a gradual reduction in the amount of global direct irradiance at the Earth's surface, may have partially counteracted global warming during the period 1960-1990. Human-caused aerosols likely precipitated this effect. Scientists have stated with 66–90% confidence that the effects of human-caused aerosols, along with volcanic activity, have offset some of the warming effect of increasing greenhouse gases.

Ozone depletion, the steady decline in the total amount of ozone in Earth's stratosphere, is sometimes cited in relation to global warming. Although there are a few areas of linkage the relationship between the two is not strong.
Posted by Aama la at 8:46 AM No comments: