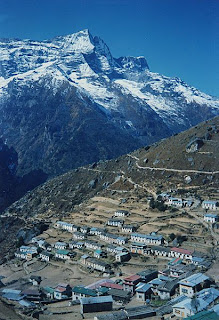 From Katmandu, there is a road for some distance followed by trekking paths to Mt Everest, which crosses four major tributaries of the Koshi. Namche Bazar near Tibet border in Nepal (near southern base camp of Mt Everest) is the major tourist centre in the mountainous part of the Koshi belt. Birātnagar in Nepal, and Purnia and Katihār in India are major cities on the Koshi Plains. Kamlā, Bāghmati (Kareh) and Budhi Gandak are major tributaries of Koshi in India, besides minor tributaries like Bhutahi Balān.
Geography

In Nepal the Koshi lies to the west of Kanchenjunga. It has seven major tributaries: the Sun Koshi, the Tama Koshi or Tamba Koshi, the Dudh Koshi, the Indravati, the Likhu River, the Arun and the Tamur. The Dudh Koshi joins the Sun Koshi at the Nepalese village of Harkapur. At Triveni Sun the Koshi is joined by the Arun and the Tamar, after which the river is called the Sapta Koshi. At Barāhkṣetra in Nepal, it descends from the mountains and it is then called simply the Koshi. These tributaries encircle Mt Everest from all sides and are fed by the world's highest glaciers. Further down the Triveni, the river cuts a deep gorge across the lesser Himalayan range of Mahabharat Lekh in a length of 10 km (6.2 mi) and debouches into the plains near Chatra. After flowing for another 58 km (36 mi), it enters the north Bihar plains near Bhimnagar and after another 260 km (160 mi), flows into the Ganges near Kursela(1). The river travels a distance of 729 km (453 mi) from its source to the confluence with the Ganges.
The Kosi river fan located in the northern part of India (in northeast Bihar and eastern Mithila) is one of the largest alluvial cones built by any river in the world. This 180 km (110 mi)-long and 150 km (93 mi)-wide alluvial cone shows evidence of lateral channel shifting exceeding 120 km (75 mi) during the past 250 years through more than 12 distinct channels. The river, which used to flow near Purnea in the 18th century, now flows west of Saharsa (1). The Kosi alluvial cone and its adjoining area have been studied in detail by remote sensing techniques. The data have been integrated with the available geological and geophysical information to decipher the causes responsible for the lateral shift of such a high-magnitude fan. A satellite image shows the old palaeo-channels of the Koshi river with its former (before 1731) confluence with the Mahananda River north of Lava.
Posted by Aama la at 8:18 AM