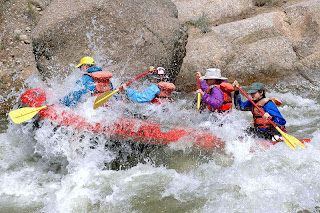 Rafts were originally the simplest form of man’s transportation in water and were then made of several logs, planks or reeds which were fastened together. Nowadays, inflatable boat were used as rafts which were later adopted by the military for beach assaults. It consists of very durable, multi-layered rubberized or vinyl fabrics with several independent air chambers. Its length varies between 3.5 m (11 ft) and 6 m (20 ft), the width between 1.8 m (6 ft) and 2.5 m (8 ft). The exception to this size rule is usually the packraft, which is designed as a portable single-person raft and may be as small as 1.5m long and weigh as little as 4 lbs.
Rafts come in a few different forms. In Europe the most common is the symmetrical raft steered with a paddle at the stern. Other types are the asymmetrical, rudder-controlled raft and the symmetrical raft with central helm (oars). Rafts are usually propelled with ordinary paddles and typically hold 4 to 12 persons. In Russia rafts are often hand made and are often a catamaran style with two inflatable tubes attached to a frame. Pairs of paddlers navigate these rafts. Catamaran style rafts have become popular in the western United States as well, but are typically rowed instead of paddled.
Rivers with high current are used for White water rafting. Specially, White Water Rafting is popular in Nepal due to high current of water falling through hills and rocky mountains.
Classes of Whitewater
Class 1: Very small rough areas, requires no maneuvering. (Skill Level: None)
Class 2: Some rough water, maybe some rocks, might require maneuvering.(Skill Level: Basic Paddling Skill)
Class 3: Whitewater, small waves, maybe a small drop, but no considerable danger. May require significant maneuvering.(Skill Level: Experienced paddling skills)
Class 4: Whitewater, medium waves, maybe rocks, maybe a considerable drop, sharp maneuvers may be needed. (Skill Level: Whitewater Experience)
Class 5: Whitewater, large waves, possibility of large rocks and hazards, possibility of a large drop, requires precise maneuvering (Skill Level: Advanced Whitewater Experience)
Class 6: Class 6 rapids are considered to be so dangerous as to be effectively unnavigable on a reliably safe basis. Rafters can expect to encounter substantial whitewater, huge waves, huge rocks and hazards, and/or substantial drops that will impart severe impacts beyond the structural capacities and impact ratings of most all rafting equipment. Traversing a Class 6 rapid has a dramatically increased likelihood of ending in serious injury or death compared to lesser classes. (Skill Level: Successful completion of a Class 6 rapid without serious injury or death is widely considered to be a matter of luck or extreme skill)
Posted by Aama la at 6:51 AM No comments: 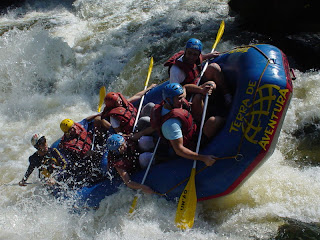 Rafting or whitewater rafting is a challenging recreational activity utilizing a raft to navigate a river or other bodies of water. This is usually done on whitewater or different degrees of rough water, in order to thrill and excite the raft passengers. The development of this activity as a leisure sport has become popular since the mid 1970s.
History
Rafting is one of the earliest means of transportation, used as a means for shipping people, hunting, and transferring food.
In 1842, Lieutenant John Fremont of the U.S. Army first journalized his rafting expedition on the Platte River. Horace H. Day designed the equipment he used in rafting. Day’s rafts were constructed from four independent rubber cloth tubes and wrap-around floor.
In 1960s, rafting was then recognized and paths like Grand Canyon were routed and whitewater rafting companies were established.
In 1970s, rafting marked its major development as a leisure sport when it was then included in the Munich Olympic Games.
In 1980s, as rafting continued to gain its popularity, many rivers were opened for rafting activities including rivers in South America and Africa.
In 1990s, rafting was included in major game events like the Barcelona Games in 1992, Atlanta Games in 1996, and the whitewater events of the Summer Olympic Games hosted by Ocoee River in Tennessee Valley. In addition, the International Federation of Rafting was instituted in 1997 and in 1999 the first Official International Championship was held.
Currently, river rafting is still gaining popularity among extreme water sports in order to thrill and excite the raft passengers.
Posted by Aama la at 11:40 PM No comments: 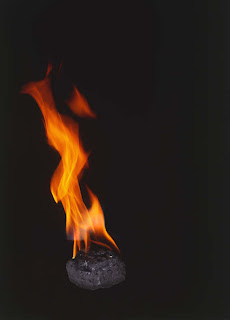 There are hundreds of coal fires burning around the world. Those burning underground can be difficult to locate and many cannot be extinguished. Fires can cause the ground above to subside, their combustion gases are dangerous to life, and breaking out to the surface can initiate surface wildfires. Coal seams can be set on fire by spontaneous combustion or contact with a mine fire or surface fire. A grass fire in a coal area can set dozens of coal seams on fire. Coal fires in China burn 109 million tons of coal a year, emitting 360 million metric tons of CO2. This contradicts the ratio of 1:1.83 given earlier, but it amounts to 2-3% of the annual worldwide production of CO2 from fossil fuels, or as much as emitted from all of the cars and light trucks in the United States. In Centralia, Pennsylvania (a borough located in the Coal Region of the United States) an exposed vein of coal ignited in 1962 due to a trash fire in the borough landfill, located in an abandoned anthracite strip mine pit. Attempts to extinguish the fire were unsuccessful, and it continues to burn underground to this day. The Australian Burning Mountain was originally believed to be a volcano, but the smoke and ash comes from a coal fire which may have been burning for over 5,500 years.
At Kuh i Malik in Yagnob Valley, Tajikistan, coal deposits have been burning for thousands of years, creating vast underground labyrinths full of unique minerals, some of them very beautiful. Local people once used this method to mine ammoniac. This place has been well-known since the time of Herodotus, but European geographers mis-interpreted the Ancient Greek descriptions as the evidence of active volcanism in Turkestan (up to the 19th century, when Russian army invaded the area).
The reddish siltstone rock that caps many ridges and buttes in the Powder River Basin (Wyoming), and in western North Dakota is called porcelanite, which also may resemble the coal burning waste "clinker" or volcanic "scoria". Clinker is rock that has been fused by the natural burning of coal. In the Powder River Basin approximately 27 to 54 billion tons of coal burned within the past three million years. Wild coal fires in the area were reported by the Lewis and Clark Expedition as well as explorers and settlers in the area.
Production trends Coal output in 2005. A coal mine in Jharkhand, India. India has about 10% of world's coal reserves.In 2006, China was the top producer of coal with 38% share followed by the USA and India, reports the British Geological Survey.
Posted by Aama la at 4:04 PM No comments:

Energy density
The energy density of coal, i.e. its heating value, is roughly 24 megajoules per kilogram.
The energy density of coal can also be expressed in kilowatt-hours for some unit of mass, the units that electricity is most commonly sold in, to estimate how much coal is required to power electrical appliances. One kilowatt-hour is 3.6 MJ, so the energy density of coal is 6.67 kW·h/kg. The typical thermodynamic efficiency of coal power plants is about 30%, so of the 6.67 kW·h of energy per kilogram of coal, 30% of that—2.0 kW·h—can successfully be turned into electricity; the rest is waste heat. So coal power plants obtain approximately 2.0 kW·h per kilogram of burned coal.
As an example, running one 100 watt computer for one year requires 876 kW·h (100 W × 24 h/day × 365 {days in a year} = 876000 W·h = 876 kW·h). Converting this power usage into physical coal consumption:
876kW.h/2.0kW.h/kg=438 Kg of Coal=966 pounds of Coal
It takes 438 kg (966 lb) of coal to power a computer for one full year. One should also take into account transmission and distribution losses caused by resistance and heating in the power lines, which is in the order of 5–10%, depending on distance from the power station and other factors.
Relative carbon costBecause coal is at least 50% carbon (by mass), then 1 kg of coal contains at least 0.5 kg of carbon, which is
0.5kg/12.kg/kmol=1/24kmol
where 1 mol is equal to NA (Avogadro Number) particles. This combines with oxygen in the atmosphere during combustion, producing carbon dioxide, with an atomic weight of (12 + 16 × 2 = mass(CO2) = 44 kg/kmol), so 1⁄24 kmol of CO2 is produced from the 1⁄24 kmol present in every kilogram of coal, which once trapped in CO2 weighs approximately
1/24kmol.44kg/kmol=11/6kg=1.6kg
. This can be used to put a carbon-cost of energy on the use of coal power. Since the useful energy output of coal is about 30% of the 6.67 kW·h/kg(coal), we can say about 2 kW·h/kg(coal) of energy is produced. Since 1 kg coal roughly translates as 1.83 kg of CO2, we can say that using electricity from coal produces CO2 at a rate of about 0.915 kg/(kW·h), or about 0.254 kg/MJ.
This estimate compares favourably with the U.S. Energy Information Agency's 1999 report on CO2 emissions for energy generation, which quotes a specific emission rate of 950 g CO2/(kW·h). By comparison, generation from oil in the U.S. was 890 g CO2/(kW·h), while natural gas was 600 g CO2/(kW·h). Estimates for specific emission from nuclear power, hydro, and wind energy vary, but are about 100 times lower. See environmental effects of nuclear power for estimates.