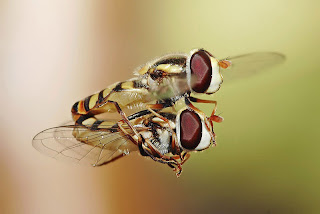 Macro / Texture
The macro photography article explains close-up photography in general; however, this is also a type of nature photography. While common macro subjects - bees, dragonflies, and so on - could be described as wildlife, their world also makes for good photography.
Many photographers record images of the texture in a stone, tree bark, leaf, or any of other small scenes. Many of these images are abstract. Tiny plants and mushrooms are also popular subjects. Close-up nature photography doesn't always need a true macro lens; however, the scenes here are small enough that they're generally considered different from regular landscapes.
Use of Color
The presence (or absence) of color is not a requirement of nature photography. More black and white photos are being produced by digital means today than on film in the 1930s.
Ansel Adams is famous for his black and white depictions of nature, which are still held in high regard today. Galen Rowell praised Fuji Velvia film for its bright, saturated colors, asking "Who wants to take dull pictures that will last a hundred years?" Both men distinguish between photography as an expressive art form and sensitometry; an accurate reproduction is not necessary.
Ethics
A number of ethical concerns and debates surround the creation of nature photography. Common issues involve the potential of stress or harm to wildlife, the potential of photographers overrunning and destroying natural areas, the use of game farms, and veracity and manipulation in photography.
Posted by Aama la at 1:02 PM No comments: 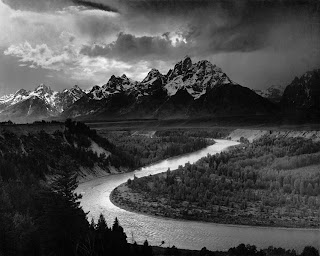 Nature photography refers to a wide range of photography taken outdoors and devoted to displaying natural elements such as landscapes, wildlife, plants, and close-ups of natural scenes and textures. Nature photography tends to put a stronger emphasis on the aesthetic value of the photo than other photography genres, such as photojournalism and documentary photography.
Nature photographs are published in scientific, travel and cultural magazines such as National Geographic Magazine and Audubon Magazine or other more specific magazines such as Outdoor Photographer and Nature's Best Photography.
Landscape Photography
Landscape photography, also known as Landscape art, is a genre meant to show the beauty of the natural world. Most landscape photographers strive to show as little human activity as possible, ideally none, in their photos. Instead, the subjects are landforms, weather, and ambient light.
Waterfalls are especially popular, as are mountain vistas. These often call for neutral density or polarizing filters.
Landscapes are most often created with a wide angle lens (24 mm and 35 mm are especially popular) and a tripod. Small apertures (f/11 to f/22) are used to maximize depth of field. Many photographers use medium or large format systems to record as much detail as possible, although the vast majority of landscapes shot today are from digital SLRs and compact cameras.
Landscape photography has become a valuable tool to inspire environmental stewardship. Capturing the beauty of unspoiled places serves to bring dwindling wilderness areas into the public eye. Many noted landscape photographers provide images to environmental protection organizations. Noted organizations use professional and amateur photographers' work to further the preservation cause.
Wildlife Photography 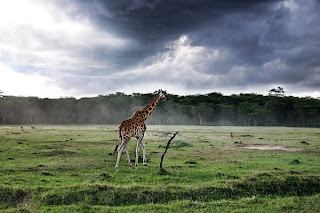 Photography as an art form

Photography as an art form
During the twentieth century, both fine art photography and documentary photography became accepted by the English-speaking art world and the gallery system. In the United States, a handful of photographers, including Alfred Stieglitz, Edward Steichen, John Szarkowski, and Edward Weston, spent their lives advocating for photography as a fine art. At first, fine art photographers tried to imitate painting styles. This movement is called Pictorialism, often using soft focus for a dreamy, 'romantic' look. In reaction to that, Weston, Ansel Adams, and others formed the f/64 Group to advocate 'straight photography', the photograph as a (sharply focused) thing in itself and not an imitation of something else.
The aesthetics of photography is a matter that continues to be discussed regularly, especially in artistic circles. Many artists argued that photography was the mechanical reproduction of an image. If photography is authentically art, then photography in the context of art would need redefinition, such as determining what component of a photograph makes it beautiful to the viewer. The controversy began with the earliest images "written with light"; Nicéphore Niépce, Louis Daguerre, and others among the very earliest photographers were met with acclaim, but some questioned if their work met the definitions and purposes of art.
Clive Bell in his classic essay Art states that only "significant form" can distinguish art from what is not art.
“ There must be some one quality without which a work of art cannot exist; possessing which, in the least degree, no work is altogether worthless. What is this quality? What quality is shared by all objects that provoke our aesthetic emotions? What quality is common to Sta. Sophia and the windows at Chartres, Mexican sculpture, a Persian bowl, Chinese carpets, Giotto's frescoes at Padua, and the masterpieces of Poussin, Piero della Francesca, and Cezanne? Only one answer seems possible - significant form. In each, lines and colors combined in a particular way, certain forms and relations of forms, stir our aesthetic emotions. ”
On February 14th 2006 Sotheby’s London sold the 2001 photograph "99 Cent II Diptychon" for an unprecedented $3,346,456 to an anonymous bidder making it the most expensive of all time.
Technical photography
The camera has a long and distinguished history as a means of recording phenomena from the first use by Daguerre and Fox-Talbot, such as astronomical events (eclipses for example) and small creatures when the camera was attached to the eyepiece of microscopes (in photomicroscopy). The camera also proved useful in recording crime scenes and the scenes of accidents, one of the first uses being at the scene of the Tay Rail Bridge disaster of 1879. The set of accident photographs was used in the subsequent court of inquiry so that witnesses could identify pieces of the wreckage, and the technique is now commonplace in courts of law.
Between 1846 and 1852 Charles Brooke invented a technology for the automatic registration of instruments by photography. These instruments included barometers, thermometers, psychrometers, and magnetometers, which recorded their readings by means of an automated photographic process.
Other photographic image forming techniques
Besides the camera, other methods of forming images with light are available. For instance, a photocopy or xerography machine forms permanent images but uses the transfer of static electrical charges rather than photographic film, hence the term electrophotography. Photograms are images produced by the shadows of objects cast on the photographic paper, without the use of a camera. Objects can also be placed directly on the glass of an image scanner to produce digital pictures
Posted by Aama la at 1:03 AM No comments:

Photography styles
Commercial photography
Manual shutter control and exposure settings can achieve unusual resultsCommercial photography is probably best defined as any photography to which money exchanges hands. In this light money could be paid for the subject of the photograph or the photograph itself. Wholesale, retail, and professional uses of photography would fall under this definition. The commercial photographic world could include:
The market for photographic services demonstrates the aphorism "one picture is worth a thousand words," which has an interesting basis in the history of photography. Magazines and newspapers, companies putting up Web sites, advertising agencies and other groups pay for photography.
Many people take photographs for self-fulfillment or for commercial purposes. Organizations with a budget and a need for photography have several options: they can employ a photographer directly, organize a public competition, or obtain rights to stock photographs. Photo stock can be procured through traditional stock giants, such as Getty Images or Corbis; smaller microstock agencies, such as Fotolia; or web marketplaces, such as Cutcaster.

Digital photography
Traditional photography burdened photographers working at remote locations without easy access to processing facilities, and competition from television pressured photographers to deliver images to newspapers with greater speed. Photo journalists at remote locations often carried miniature photo labs and a means of transmitting images through telephone lines. In 1981, Sony unveiled the first consumer camera to use a charge-coupled device for imaging, eliminating the need for film: the Sony Mavica. While the Mavica saved images to disk, the images were displayed on television, and the camera was not fully digital. In 1990, Kodak unveiled the DCS 100, the first commercially available digital camera. Although its high cost precluded uses other than photojournalism and professional photography, commercial digital photography was born.
Digital imaging uses an electronic image sensor to record the image as a set of electronic data rather than as chemical changes on film. The primary difference between digital and chemical photography is that chemical photography resists manipulation because it involves film and photographic paper, while digital imaging is a highly manipulative medium. This difference allows for a degree of image post-processing that is comparatively difficult in film-based photography and permits different communicative potentials and applications.
Digital point-and-shoot cameras have become widespread consumer products, outselling film cameras, and including new features such as video and audio recording. Kodak announced in January 2004 that it would no longer sell reloadable 35 mm cameras in western Europe, Canada and the United States after the end of that year. Kodak was at that time a minor player in the reloadable film cameras market. In January 2006, Nikon followed suit and announced that they will stop the production of all but two models of their film cameras: the low-end Nikon FM10, and the high-end Nikon F6. On May 25, 2006, Canon announced they will stop developing new film SLR cameras.
According to a survey made by Kodak in 2007, 75 percent of professional photographers say they will continue to use film, even though some embrace digital.
According to the U.S. survey results, more than two-thirds (68 percent) of professional photographers prefer the results of film to those of digital for certain applications including:
Because photography is popularly synonymous with truth ("The camera doesn't lie."), digital imaging has raised many ethical concerns. Many photojournalists have declared they will not crop their pictures, or are forbidden from combining elements of multiple photos to make "illustrations," passing them as real photographs. Many courts will not accept digital images as evidence because of their inherently manipulative nature. Today's technology has made picture editing relatively simple for even the novice photographer.