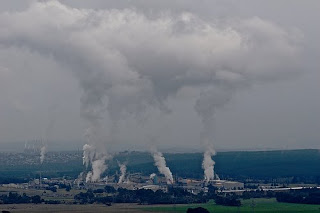 Coals can also be converted into liquid fuels like gasoline or diesel by several different processes. The Fischer-Tropsch process of indirect synthesis of liquid hydrocarbons was used in Nazi Germany for many years and is today used by Sasol in South Africa. Coal would be gasified to make syngas (a balanced purified mixture of CO and H2 gas) and the syngas condensed using Fischer-Tropsch catalysts to make light hydrocarbons which are further processed into gasoline and diesel. Syngas can also be converted to methanol, which can be used as a fuel, fuel additive, or further processed into gasoline via the Mobil M-gas process.A direct liquefaction process Bergius process (liquefaction by hydrogenation) is also available but has not been used outside Germany, where such processes were operated both during World War I and World War II. SASOL in South Africa has experimented with direct hydrogenation. Several other direct liquefaction processes have been developed, among these being the SRC-I and SRC-II (Solvent Refined Coal) processes developed by Gulf Oil and implemented as pilot plants in the United States in the 1960s and 1970s.
Another direct hydrogenation process was explored by the NUS Corporation in 1976 and patented by Wilburn C. Schroeder. The process involved dried, pulverized coal mixed with roughly 1wt% molybdenum catalysts. Hydrogenation occurred by use of high temperature and pressure synthesis gas produced in a separate gasifier. The process ultimately yielded a synthetic crude product, Naphtha, a limited amount of C3/C4 gas, light-medium weight liquids (C5-C10) suitable for use as fuels, small amounts of NH3 and significant amounts of CO2.
Yet another process to manufacture liquid hydrocarbons from coal is low temperature carbonization (LTC). Coal is coked at temperatures between 450 and 700°C compared to 800 to 1000°C for metallurgical coke. These temperatures optimize the production of coal tars richer in lighter hydrocarbons than normal coal tar. The coal tar is then further processed into fuels. The Karrick process was developed by Lewis C. Karrick, an oil shale technologist at the U.S. Bureau of Mines in the 1920s.
All of these liquid fuel production methods release carbon dioxide (CO2) in the conversion process, far more than is released in the extraction and refinement of liquid fuel production from petroleum. If these methods were adopted to replace declining petroleum supplies, carbon dioxide emissions would be greatly increased on a global scale. For future liquefaction projects, Carbon dioxide sequestration is proposed to avoid releasing it into the atmosphere, though no pilot projects have confirmed the feasibility of this approach on a wide scale. As CO2 is one of the process streams, sequestration is easier than from flue gases produced in combustion of coal with air, where CO2 is diluted by nitrogen and other gases. Sequestration will, however, add to the cost.
The reaction of coal and water using high temperature heat from a nuclear reactor offers promise of liquid transport fuels that could prove carbon-neutral compared to petroleum use. The development of a reliable nuclear reactor that could provide 900 to 1000 deg C process heat, such as the pebble bed reactor, would be necessary.
Coal liquefaction is one of the backstop technologies that could potentially limit escalation of oil prices and mitigate the effects of transportation energy shortage that some authors have suggested could occur under peak oil. This is contingent on liquefaction production capacity becoming large enough to satiate the very large and growing demand for petroleum. Estimates of the cost of producing liquid fuels from coal suggest that domestic U.S. production of fuel from coal becomes cost-competitive with oil priced at around 35 USD per barrel, (break-even cost). The current price of oil, as of July 11, 2008, is 145 USD per barrel. This makes coal a viable financial alternative to oil for the time being, although current production is small.
Among commercially mature technologies, advantage for indirect coal liquefaction over direct coal liquefaction are reported by Williams and Larson (2003). Estimates are reported for sites in China where break-even cost for coal liquefaction may be in the range between 25 to 35 USD/barrel of oil.
Intensive research and project developments have been implemented from 2001. The World CTL Award is granted to personalities having brought eminent contribution to the understanding and development of Coal liquefaction. The 2009 presentation ceremony will take place in Washington DC (USA) at the World CTL 2009 Conference (25-27 March, 2009).
Posted by Aama la at 10:38 PM

Thanks for your educational posts. Because your posts are so informative and there is no information about you on the site, I am curious what motivates your interest in coal. I am an outsider to the energy industry but see CTL technology as a promising way to provide a domestic source of fossil fuel that has a smaller environmental impact than traditional coal.

"I'm in debt. How do I get out of it?" It's a common question these days, and a problem that's made no easier by today's economic troubles. But whatever debts an individual is facing, they're likely to have at least one debt solution available to them. Scottish Trust Deeds is similar to an IVA, but only available to residents of Scotland. In most cases, a Trust Deed will last for three years.