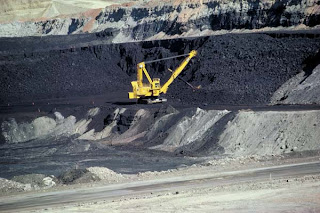 Coal mining
Coal mining is the extraction or removal of coal from the earth by mining. When coal is used for fuel in power generation it is referred to as steaming or thermal coal. Coal that is used to create coke for steel manufacturing is referred to as coking or metallurgical coal. In the United States, UK, and South Africa, a coal mine and its accompanying structures are collectively known as a colliery. In Australia, 'colliery' usually only refers to an underground coal mine.
History
The oldest continuously worked deep-mine in the UK and possibly the world is Tower Colliery at the northern end of the South Wales valleys in the heart of the South Wales coalfield. This colliery was started in 1805 and at the end of the 20th century it was bought out by its miners rather than being allowed to be closed. Tower Colliery was finally closed on the 25th January 2008.
The World Championships in coal-carrying take place every Easter Monday, at Ossett, West Yorkshire, UK. The race starts from the site of the old Savile & Shaw Cross colliery.
The first commercial coal mines in the United States were started in 1748 in Midlothian, Virginia, near Richmond, Virginia.
In the 1880s, Coal-cutting machines became available (prior to that, coal was mined underground by hand using a pick and shovel.)
By 1912, surface mining was underway with steam shovels specifically designed for coal mining.
Methods of extraction
The most economical method of coal extraction from coal seams depends on the depth and quality of the seams, and also the geology and environmental factors of the area being mined. Coal mining processes are generally differentiated by whether they operate on the surface or underground. Many coals extracted from both surface and underground mines require washing in a coal preparation plant.
Modern surface mining
Trucks loaded with coal at the Cerrejón coal mine in Colombia.When coal seams are near the surface, it may be economical to extract the coal using open cut (also referred to as open cast or open pit) mining methods. Typically, for coal, strip mining is used. Strip mining exposes the coal by the advancement of an open pit or strip. The earth above the coal seam(s) is known as overburden. A strip of overburden next to the previously mined strip is usually drilled. The drill holes are filled with explosives and blasted. The overburden is then removed using large earthmoving equipment such as draglines, shovel and trucks, excavator and trucks, or bucket-wheels and conveyors. This overburden is put into the previously mined (and now empty) strip. When all the overburden is removed, the underlying coal seam will be exposed as a strip known as a 'block'. This 'block' of coal may be drilled and blasted (if hard) or otherwise loaded on to trucks or conveyors for transport to the coal preparation (or wash) plant. Once this strip is empty of coal, the process is repeated with a new strip being created next to it.
Open cast coal mining recovers a greater proportion of the coal deposit than underground methods, as more of the coal seams in the strata may be exploited. Opencast coal mines can cover many square kilometers.
Most open cast mines in the United States extract bituminous coal. In South Wales open casting for steam coal and anthracite is practiced. In Australia and South Africa open cast mining is used for both thermal and metallurgical coals. Surface mining accounts for around 80% of production in Australia, while in the USA it is used for about 67% of production. Globally, about 40% of coal production involves surface mining.
Mountaintop removal is a form of surface mining that takes place at the topmost portion of a mountain, and is a technique that is commonly applied in Appalachia in the United States. Utilized for the past 30 years, mountaintop mining involves removing the highest part of the mountain for the maximum recovery of coal. The process is highly controversial for the drastic changes in topography, the practice of hollow fills, or filling in valleys with mining debris, and for covering streams and disrupting ecosystems.
Posted by Aama la at 11:09 PM