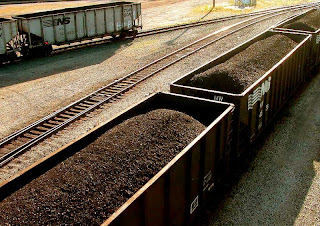 Uses today
Coal as a Fuel
Coal is primarily used as a solid fuel to produce electricity and heat through combustion. World coal consumption is about 6.2 billion tons annually, of which about 75% is used for the production of electricity. China produced 2.38 billion tons in 2006 and India produced about 447.3 million tons in 2006. 68.7% of China's electricity comes from coal. The USA consumes about 1.053 billion tons of coal each year, using 90% of it for generation of electricity. The world in total produced 6.19 billion tons of coal in 2006.
When coal is used for electricity generation, it is usually pulverized and then burned in a furnace with a boiler. The furnace heat converts boiler water to steam, which is then used to spin turbines which turn generators and create electricity. The thermodynamic efficiency of this process has been improved over time. "Standard" steam turbines have topped out with some of the most advanced reaching about 35% thermodynamic efficiency for the entire process, which means 65% of the coal energy is waste heat released into the surrounding environment. Old coal power plants, especially "grandfathered" plants, are significantly less efficient and produce higher levels of waste heat.
The emergence of the supercritical turbine concept envisions running a boiler at extremely high temperatures and pressures with projected efficiencies of 46%, with further theorized increases in temperature and pressure perhaps resulting in even higher efficiencies.
Other efficient ways to use coal are combined cycle power plants, combined heat and power cogeneration, and an MHD topping cycle.
Approximately 40% of the world electricity production uses coal. The total known deposits recoverable by current technologies, including highly polluting, low energy content types of coal (i.e., lignite, bituminous), might be sufficient for 300 years' use at current consumption levels, although maximal production could be reached within decades.
A more energy-efficient way of using coal for electricity production would be via solid-oxide fuel cells or molten-carbonate fuel cells (or any oxygen ion transport based fuel cells that do not discriminate between fuels, as long as they consume oxygen), which would be able to get 60%–85% combined efficiency (direct electricity + waste heat steam turbine).Currently these fuel cell technologies can only process gaseous fuels, and they are also sensitive to sulfur poisoning, issues which would first have to be worked out before large scale commercial success is possible with coal. As far as gaseous fuels go, one idea is pulverized coal in a gas carrier, such as nitrogen. Another option is coal gasification with water, which may lower fuel cell voltage by introducing oxygen to the fuel side of the electrolyte, but may also greatly simplify carbon sequestration. However, this technology has been criticised as being inefficient, slow, risky and costly, while doing nothing about total emissions from mining, processing and combustion.
Posted by Aama la at 10:30 AM