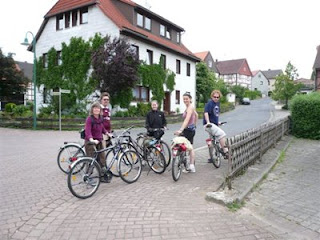 A bio-energy village is a regional orientated concept for the use of renewable energy sources in rural areas. The system uses biomass from local agriculture and forestry in a Biogas powerplant in order to supply the energy demand of a village preferably complete, as electricity and district heating.
These villages tend to be self-powered and independent from external grids; despite being connected to overland grids for feeding surplus energy. The term bio-energy village describes only the energy dependency on fresh biologic material, whereas an ecovillage includes much more differentiated networks.
Energy production
Liquid manure, grass, silage and other raw materials from agriculture are fermented in a biological gas facility. The biogas produced fuels a combined heat and power plant (CHP). The heat is distributed over a district heating system, while power is fed into a local electricity grid. In winter additional heat requirements can be supplied by an additional heating plant, in which wood chips or straw are burned.
Existing projects
Jühnde
The first bio-energy village in Germany is Jühnde in the district of Göttingen. A project of the Interdisciplinary Centre For Sustainable Development (IZNE) at the University of Göttingen, and completed in January 2006, the project supplies the heat requirement of the village, and produces twice as much electricity as is used. It has been estimated that the participating households save €750 per year in energy costs.
Mauenheim
In Mauenheim, Baden-Württemberg, a bio-energy village has been developed in Immendingen in the district of Tuttlingen, with approximately 400 inhabitants and 148 buildings. The biogas facility and wood chip heating system are supplemented by a solar energy system. The project started operation in 2006. It has been calculated that about 1900 tonnes of CO2 per year will be saved.
Posted by Aama la at 2:48 PM