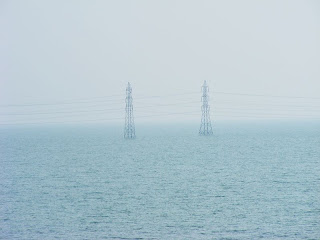 Koshi Tappu Wildlife reserve
Koshi Tappu Wildlife reserve is a wetland situated in the flood plains of the Sapta-Koshi River in Nepal's Eastern Terai. Gazette-notified as a wild life reserve in 1976, it covers a reserve area of 175 km2 (68 sq mi) and is one of the Outstanding Important Bird Areas in the Indo-Gangetic grasslands. The park has large population of Swamp Francolin, breeding Bristled Grass-warbler, records of White-throated Bushchat and Finn's Weaver. The Koshi river forms the major landmark of the reserve and is home to 80 fish species, around 441 species of birds, 30 shore birds, 114 water birds, 20 ducks and 2 ibises. The endangered swamp partridge and Bengal florican are also found here. The Koshi Barrage is an extremely important resting-place for migratory birds (87 nos winter visitors). In view of its rich biodiversity it was declared a Ramsar site of international significance in 1987. The endangered Gharial crocodile and Gangetic dolphin locally known as sons in Bihar and a further endangered species (freshwater dolphin) have been recorded in the river.
The last surviving population of wild buffalo or arna in Nepal is found in the reserve (number at present is estimated to be 150). The reserve is a habitat of 20 other animal species such as hog deer, spotted deer, wild boar, blue bull and rock python.
The vegetation mainly includes tall khar-pater grasslands with a few patches of khair-sissoo scrub forest and deciduous mixed riverine forest.
During the monsoon, the reserve is flooded with depths ranging from 10 to 300 cm (3.9 to 120 in). Birdwatching along the eastern embankment at dusk and dawn is one of the most exciting tourist attractions in the reserve. Gangetic River Dolphin, locally known as sons in Bihar, is an endangered species (freshwater dolphin).
Floods
The Kosi is known as the “Sorrow of Bihar”when it flows from Nepal to India, as it has caused widespread human suffering in the past through flooding and very frequent changes in course.
The Koshi has an average water flow (discharge) of 1 564 m³/s or 55,000 cu ft/s. During floods, it increases to as much as 18 times the average. The greatest recorded flood was 24,200 m³/s (850,000 cu ft/s) on 24 August 1954. The Kosi Barrage has been designed for a peak flood of 27,014 m³/s (954,000 cu ft/s)(2).
Owing to extensive soil erosion and landslides in its upper catchment by factors both natural and human, the silt yield of the Kosi is about 19 m³/ha/year (10 cu yd/acre/yr), one of the highest in the world. (2). The Arun, with its origins in Tibet, brings the greatest amount of coarse silt in proportion to its total sediment load. The river is able to transport its heavy sediment load down the steep gradients and narrow gorges in the mountains and foothills, but on the plains beyond Chatra where slopes are flatter the sediment load is deposited in an immense alluvial fan that has grown to an area of about 15 000 km². This fan extends some 180 km from its apex where it leaves the foothills, across the international border into Bihar state and on to the Ganges. Instead of a single well-defined channel, the river has numerous interlacing channels that shift laterally over the fan from time to time. Without sufficient channelisation, floods spread out very widely. The record flow of 24 200 m³/s is equivalent to water a meter deep and more than 24 kilometers wide, flowing down the slight slope of the alluvial fan at one meter per second.
The Kosi's alluvial fan has fertile soil and abundant groundwater in a part of the world where agricultural land is in acutely limited supply in relation to population. Subsistence farmers must balance the threat of starvation with that of floods. As a result, the flood-prone area is densely populated and subject to heavy loss of life. Floods have caused the Kosi to be called the “River of Sorrow”{3). It contributes disproportionately to India having more deaths in floods than any other country except Bangladesh.
Posted by Aama la at 1:30 PM