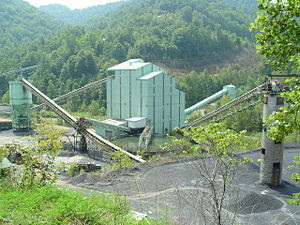 Underground mining
Coal wash plant in Clay County, Kentucky.Most coal seams are too deep underground for opencast mining and require underground mining, which method currently accounts for about 60% of world coal production. In deep mining, the room and pillar or bord and pillar method progresses along the seam, while pillars and timber are left standing to support the mine roof. Once room and pillar mines have been developed to a stopping point (limited by geology, ventilation, or economics), a supplementary version of room and pillar mining, termed second mining or retreat mining, is commonly started. This is when miners remove the coal in the pillars, thereby recovering as much coal from the coal seam as possible. A work area that is involved in pillar extraction is called a pillar section. Modern pillar sections use remote-controlled equipment, including large hydraulic mobile roof-supports, which can prevent cave-ins until the miners and their equipment have left a work area. The mobile roof supports are similar to a large dining-room table, but with hydraulic jacks for legs. After the large pillars of coal have been mined away, the mobile roof support's legs shorten and it is withdrawn to a safe area. The mine roof typically collapses once the mobile roof supports leave an area.
There are five principal underground mining methods:
Posted by Aama la at 1:30 PM